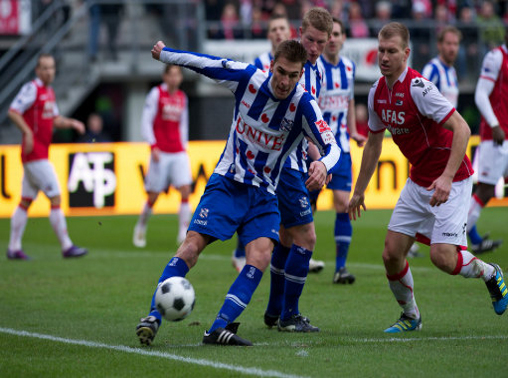 Magpies to move for Wolfsburg forward.

Newcastle United are set to turn their attentions towards Vfl Wolfsburg target man Bas Dost, report the Mirror, with the Dutchman potentially being allowed to leave the Bundesliga club after they snapped up former Arsenal striker Nicklas Bendtner on a free transfer.

The 6ft4 centre forward has a respectable scoring record for Wolfsburg since signing from Eredivise outfit Heerenveen in 2012, but is seen as little more than an impact substitute and rotation option by the club – meaning that he could be free to move to St. James’ Park.

Alan Pardew has held a long-standing interest in Dost, since his Eredivisie days when he was prolific for both Heracles and Heerenveen, but he has so far been unable to lure the player to the North East.

This could be his opportunity, however, with Newcastle also in desperate need of more options upfront having seen last season’s top score Loic Remy return to Queens Park Rangers after his loan spell ended.

Papis Cisse and new signing Siem de Jong, plus youngster Sammy Ameobi, will battle for a place in attack, but with the long-serving target man Shola Ameobi having been released on a free transfer, the signing of Dost would certainly be a welcome one for Magpies fans.