The Guardian’s Andy Hunter has predicted his Liverpool line-up ahead of their opening game of the new season against Southampton – you can read our full match preview here.

Hunter believes that just three of the Red’s new signings will start the game – although Adam Lallana and Lazar Markovic are currently carrying injuries, while Divock Origi has already returned to Lille on loan.

It is believed that Javier Manquillo, Emre Can and Dejan Lovren – playing against his former side – will start the game, while another former Saints star, Rickie Lambert, is likely to be on the bench.

Manquillo and Lovren will come into a new look back four, with the Atletico Madrid loanee starting at right back, while Glen Johnson moves over to the left. Martin Skrtel will partner Lovren at the back, while French international Mamadou Sakho will be on the bench.

Former Bayer Leverkusen star Can will get the nod in midfield ahead of the likes of Joe Allen and Lucas, and will start alongside captain Steven Gerrard and Jordan Henderson, while Brendan Rodgers will start with a fairly predictable front three of Philippe Coutinho, Raheem Sterling and Daniel Sturridge.

The two teams will be almost unrecognizable from last season’s encounter at Anfield, when Southampton won 1-0. 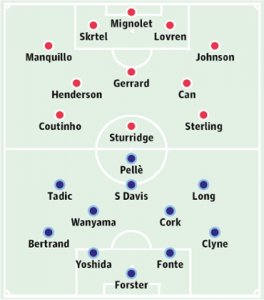