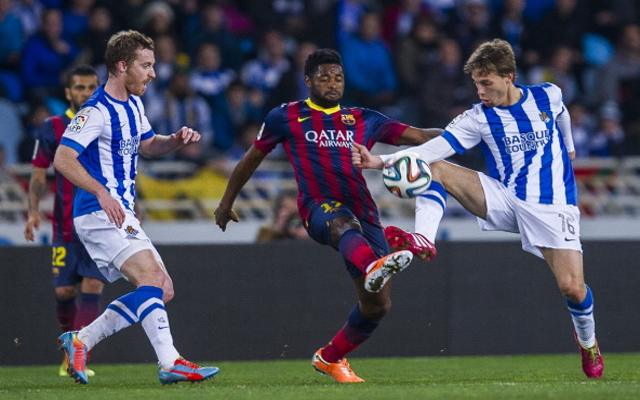 La Liga big hitters Barcelona have reportedly made midfielder Alex Song available on to loan for free and Manchester United lead a three-way Premier League chase for his signature, the Daily Telegraph reports.

United are joined in their interest by both Everton and Tottenham Hotspur, and any one of those sides could be encouraged to make a move for the player before the transfer window shuts with Barcelona not putting a monitory value on his services.

Song ideally wants to make a return to the Premier League, but Turkish giants Galatasaray as well as several clubs in Italy’s Serie A are also interested in making a move for him.

The Spaniards have put a knockdown £8 million valuation on Song’s head for a permanent transfer, but their willingness to send him on a season-long loan without receiving any fee is particularly appealing.

Liverpool were initially interested in landing his signature last year, but had since turned their attentions elsewhere, leaving the door open for fellow English clubs to plot their move.

Spurs are keen to bring him on board as they fear missing out on Southampton’s Morgan Schneiderlin, while Everton are keen to not put too much pressure on Ross Barkley too soon.

However, United could have the upper hand as they could pair Song with fellow former Arsenal star Robin Van Persie.