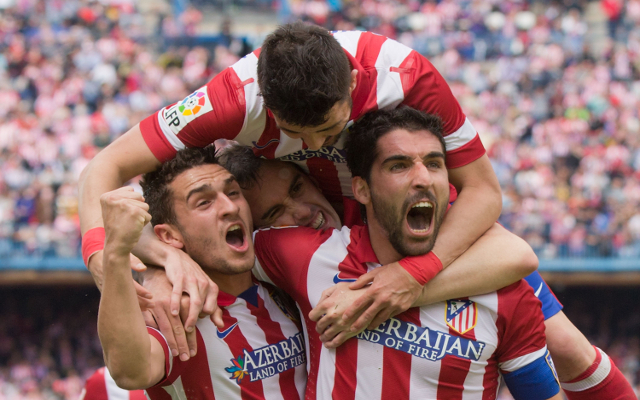 All the latest headlines from the newspapers in Spain as Atletico Madrid have the advantage ahead of the second leg of the Supercopa de Espana.

– Atletico take the lead. Raul Garcia equalises in the 87th minute and makes Madrid need to score in the Calderon.

– James Rodriguez debuts at the Bernabeu and Toni Kroos dazzles: another lesson.

– Controversy: Penalty not given for the handball by Mario Suarez and the punch by Sergio Ramos on Mario Mandzukic.

– Cristiano went off at half time in discomfort.

– Golden goal and Iraizoz bolts the door. Deserved draw for an Athletic side who suffered after a great first half.

– Luis Suarez.Anti-biting treatment. The Uruguayan acknowledges that he is in the hands of professionals to avoid a reoccurrence.

– Four hours in front of a FIFA tribunal. Barca hope for a pardon and the freedom to sign.

– Murcia case. In front of the judge tomorrow.

– Madrid claim a penalty and Atletico claim for the dismissal of Ramos.

– James goal on his debut and a replica from Raul Garcia from the final.

– Munain reigns in hell. A goal from Iker gives Athletic the advantage after a pulsating end to the game.

– The judge summons Murcia and La Liga for Thursday. They will see be judged two days before the start of the competition.

– Luis Suarez presented. ‘When Barca called me, I forgot everything’, confesses the striker who has been Azulgrana since a boy.

– Watching Messi and Neymar play in the Gamper gives you an urge to applaud.

– Atletico dig deep. Raul Garcia cancels out James’s strike in the final minutes and it all down to what happens at the Calderon.

– Munain put Los Leones ahead, Higuain levelled and San Mames will give sentence next Wednesday.