Newly promoted Leicester City made headlines yesterday, when it was suggested by several respected journalists that they were stepping up their efforts to sign Esteban Cambiasso.

The 34-year-old Argentinian midfielder is currently a free agent after a decade of service for Inter Milan, in which he played over 300 league games. The former Real Madrid and River Plate star would undoubtedly be a huge coup for Nigel Pearson’s side.

But, he’d be far from the only veteran starring in the Premier League during the 2014-15 season, here are ten other great aging stars to look out for, all of whom were 32 or older at the start of this season: 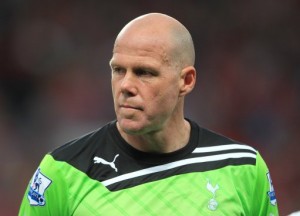 The Tottenham veteran might be down to third choice goalkeeper at White Hart Lane, but at 43-years-old he is still doing remarkably well to be of Premier League quality. The former Liverpool, Blackburn and Aston Villa man can still do a job when called upon.