Old Trafford side set to pull off major transfer coup.

The Old Trafford side have agreed a fee of €75m (£60m) for the Bernabeu duo, with Real Madrid president Florentino Perez keen to offload the players in order to help balance the books after the purchases of James Rodriguez, Toni Kroos and Keylor Navas.

Boss Louis van Gaal has been pushing chief executive Ed Woodward to seal the move for World Cup stars for some weeks and the move has gathered pace in the past fortnight with Carlo Ancelotti leaving the two players out of recent clashes against Sevilla and Atletico Madrid in the UEFA Super Cup and Spanish Super Cup clashes.

Man United’s summer spending has seemed fairly subdued following their early acquisitions of Ander Herrera and Luke Shaw but the signing of Argentine defender Marcos Rojo is set to be the first of a number of late transfer window moves.

It’s believed that the club’s opening day defeat at the hands of Swansea City, at home no less, has acted as something of a catalyst for the moves with Man United’s owners seemingly more willing to pay the sums needed to attract their top targets.

26 year old winger Angel di Maria has been planning for a Real Madrid exit since his side purchased Colombian youngster Rodriguez and though PSG are thought to have met the former Benfica star’s demands he has set his heart on a move to Man United, a move that will cost the Premier League side a club record €60m (£48m). 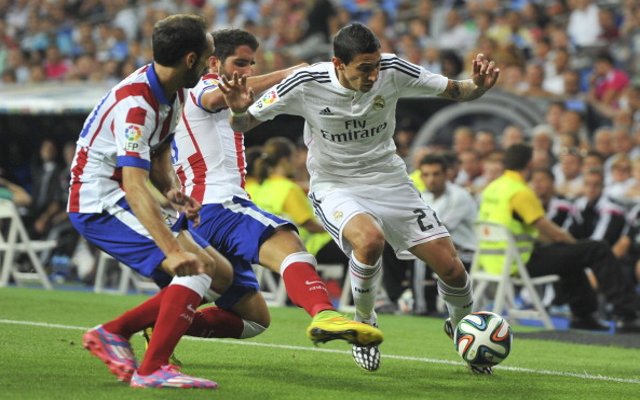 The crafty wide-man finished last term as Real Madrid’s leading assist maker and put in a Man of the Match display in the club’s Champions League final win over local rivals Atletico. He then went on to play a starring role in Argentine’s run to the World Cup final and as such does not want to be left warming the bench and has therefore committed to an exit from the club he joined four years ago.

Ancelotti had also informed Khedira that his role at the club was to be similarly limited and with just a year to run on his current deal Real Madrid have been frantically looking for a buyer for the German international.

Man United are set to pay €15m (£12m) for the 27 year old and are happy to meet the former Stuttgart man’s £200k a week wage demands and will provide van Gaal with some much needed steel in the centre of the park.

It is believes that Louis van Gaal will look to force out at least two, maybe three, first team players in order to help balance out the cost of their Real Madrid raid.

England man Danny Welbeck and Brazilian midfielder Anderson are the most likely to be on their way whilst a buyer is also being sought for Marouane Fellaini with Napoli said to be open to bringing in the Belgian on a season long loan deal that could net Man United around £3m.