How CaughtOffside thinks Manchester United will line up against Sunderland…

Manchester United will look to get their Premier League season up and running under new manager Louis van Gaal this afternoon, and will be hoping to respond well to their opening day defeat to Swansea City.

United have not lost their opening two league matches since the inaugural Premier League season in 1992-93, when they were beaten by Sheffield United and Everton, and will be keen to avoid changing that record. The Red Devils travel to Gus Poyet’s Sunderland today, who kicked off their campaign with a 2-2 draw against West Brom.

They will be without injured trio Ander Herrera, Marouane Fellaini and Jesse Lingard at the Stadium of Light, while new signing Marcos Rojo has not received a work permit in time to play. Robin van Persie and Antonio Valencia are now fit and available.

Here’s how we think United will line-up:

The Spanish goalkeeper is arguably the first name on the Manchester United team-sheet, with very limited competition for his place. 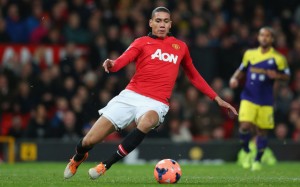 The England international will be a regular during the first-part of this season, and needs to take his opportunity to prove himself.