Angel di Maria was spotted in a Madrid airport as his proposed move from Real to Manchester United edges closer.

An Instagram user and his friends grabbed this picture with the smiling Argentine star, who is believed to be flying to England today to seal his record-breaking switch.

See the picture that was posted on the social media website below: 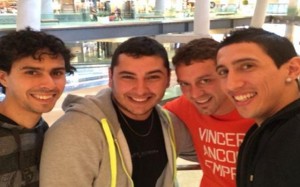