Mario Balotelli looked relaxed earlier today, as he spent time with his brother and their friends ahead of his proposed transfer move from AC Milan to Liverpool.

The £16m Italian could be at the Etihad Stadium, home of his former club Manchester City, this evening – with his switch to away side Liverpool set to be completed in the near future. 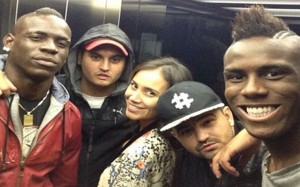