Gianmario Comi, a 22 year-old striker on loan at Avellino from Italian giants AC Milan, took a leaf out of Luis Suarez’s playbook when he bit an opposing player during a Coppa Italia clash.

It was a moment reminiscent of Barcelona’s former Liverpool striker Luis Suarez, who has bitten three opponents during his career – most recently while playing for Uruguay during this summer’s World Cup.

At the end of the 2012-13 season he bit Chelsea defender Branislav Ivanovic, before ironically scoring the equaliser in a 2-2 draw at Anfield.

The incident came when Comi bit Bari’s Giuseppe de Luca, during a confrontation and fall from a free-kick. The referee and linesmen failed to spot the bite, and as a result a furious De Luca managed to get himself sent off.

To make matters worse for ten-man Bari, Comi would later score the equaliser in the third round cup tie, with Avellino going on to win the match. Bari have since posted a picture of Giuseppe de Luca’s bite mark on their website.

Watch the video of the bite below: 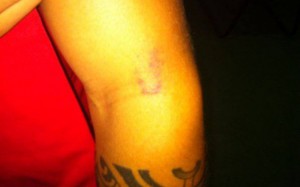