Manchester United have confirmed their startling line-up for the game with MK Dons. They have made ten changes from the team that drew with Sunderland last weekend.

The Capital One Cup second round tie kicks-off tonight at 8pm.

The only man to keep his place from the game with Sunderland – showing how little back-up he has. 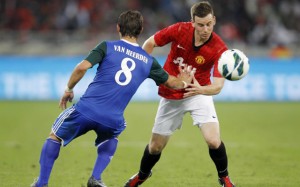 The 22-year-old Belgian gets a rare start.