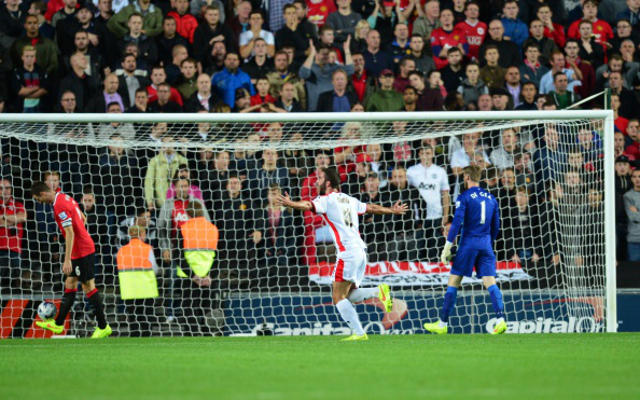 Should either senior Old Trafford star play another Premier League match for the club, after watching this performance it’s hard to imagine Louis van Gaal will select them again.

If Louis van Gaal was hopeful of securing his first win as Man United boss against League One side MK Dons he wasn’t holding onto that thought for long.

25 mins in and Jonny Evans is guilty of a shocking loss of concentration, watch as he hands the MK Dons possession in his own penalty area and Will Grigg gleefully slots home.

Just after the hour mark Man United’s defence fell asleep again and a good sweeping move left Grigg all alone to chest home, this time Anderson can be seen barely trying to prevent the goal, instead looking to blame others.

Benik Afobe made it 3-0 after 69 minutes after a smart flowing move and then the loaned out Arsenal powered past the United defence to smash home a fourth.

Louis van Gaal named an inexperienced side which included some notable senior players and will not be happy at the displays put in by some on show.

The question is, do the likes of Javier Hernandez, Jonny Evans, Anderson, Shinji Kagawa and Michael Keane have futures at the club under the Dutch manager?