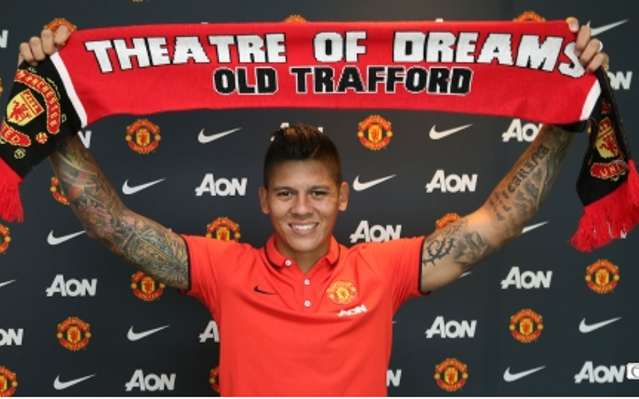 Marcos Rojo has prevented from making his Manchester United debut…

Manchester United fans have been left frustrated thus far, as they wait on the debut of Argentine defender Marcos Rojo.

Despite signing from Sporting Lisbon in a £16m deal almost two weeks ago, problems with his UK visa have thus far prevented the player from making his first appearance for the club.

Reports in the Daily Mail have revealed that Rojo has been forced to fly to Madrid in an attempt to resolve the issues, which involve the player’s alleged altercation with a neighbour four years ago – Rojo was never prosecuted, but the case was reopened in May.

United officials are convinced that the matter will be cleared up soon, but the Old Trafford faithful have so far been left frustrated – as Rojo’s absence continues to hamper the club’s ailing back-line.

The source explains that there has been speculation that Rojo has run in to problems over third party ownership – he was part owned by an agency when playing in Portugal – or that he hadn’t played enough competitive games for his country to qualify for a work permit.

However it is understood that the actual issue is that Rojo is waiting to see if he will be given a UK visa as embassy officials look in to the details of an altercation with a neighbour in Argentina in 2010 that still lies on his file in his home country.

Rojo is likely to be granted a visa as he does not have a criminal record, but the embassy officials are checking the exact details of the situation before processing his documentation. The player will undertake an interview in Spain today before a decision is made.