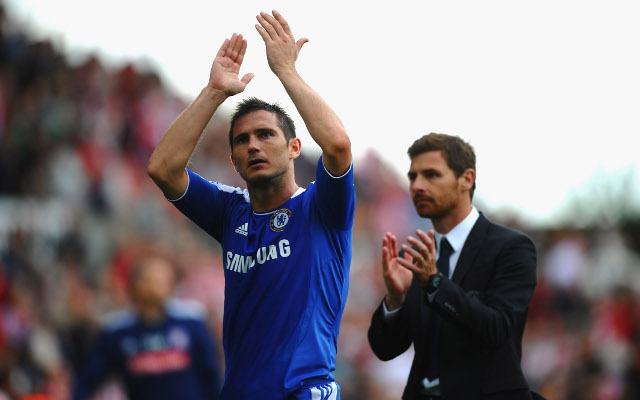 Blues legend reveals truth behind AVB reign.Chelsea legend Frank Lampard has laughed off rumours that players at Stamford Bridge got Andre Villas-Boas the sack during his short spell at the club in the 2011/12 season.

In a revealing interview in today’s Sun, Lampard has spoken at length about a number of issues during his time at Chelsea, including his exit this summer that led to a surprise loan move to Manchester City.

The 36-year-old has also attempted to set some records straight relating to Villas-Boas’ ill-fated time at Stamford Bridge in the 2011/12 season that saw him sacked midway through the season.

Rumours suggested that the Portuguese coach, who later managed Tottenham Hotspur, was unpopular with a number of senior players at Chelsea and that this led to the likes of John Terry, Ashley Cole and Lampard himself requesting that he be shown the door by owner Roman Abramovich.

However, Lampard insists that such a notion is ridiculous and that Abramovich would not have paid attention to the requests of the players, though he also maintained that he and his team-mates also remained entirely professional throughout what he admitted was a difficult time.

“AVB had played his cards and it hadn’t worked. I don’t know if he was too young or whether it had come too early for him,” he said.

“One thing I will address is that a lot of people said when he and Phil Scolari and some of the other managers left it was all down to player power at Chelsea.

“That’s a load of c**p. I’m being completely honest because… OK, AVB and I weren’t very close but I don’t need to be close to my manager… but I am definitely not the type to act up.

“No one at the club was. Even Ash, who I know wasn’t happy not playing week-in week-out, would never have run off and said ‘Please sack the manager, we’ve had enough of him’. That’s plain ridiculous. We are professionals.

“Can you imagine what Roman Abramovich would’ve said to him? ‘I pay your wages, I make the decisions, now f*** off and play.”