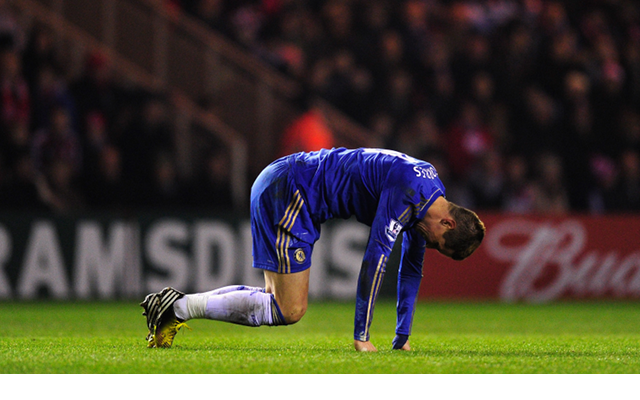 Ex-Blues star admits Torres cracked under pressure.Former Chelsea midfielder Frank Lampard has revealed in an interview with the Sun today that his old team-mate Fernando Torres struggled with expectations following his £50m move from Liverpool.

The Spanish striker made the loan move to AC Milan this summer on a two-year deal, which looks likely to end his nightmarish time at Stamford Bridge, during which he has flopped badly after a big-money move from rivals Liverpool back in 2011.

Once regarded as one of the best players in the world, Torres could not regain his best form during his time at Stamford Bridge, scoring just 45 goals in 172 appearances, only 20 of which came in 110 Premier League games.

No doubt one of the most expensive transfer flops in history, the 30-year-old was finally cleared out this summer, and Lampard has revealed that the player struggled to cope with that weight of such a hefty price tag on his shoulders.

“Fernando is quite a quiet lad and he suffered at Chelsea. He found it hard with the big price tag and it didn’t go for him,” the former England international explained.

However, the 36-year-old added that Torres showed great character to keep on going, and that he had the full support of his team-mates and fans behind him for his entire three and a half years in London.

“But he always kept his head down, worked hard, trained hard and his goal (away to Barcelona to send Chelsea into the Champions League final) was a massive reward for him. We couldn’t have been more delighted for him,” he added.

“Whatever people say about Fernando, Chelsea fans were amazing with him.

“It would’ve been easy for them to have had a go but they backed him to the hilt and they will never forget him for that moment alone.

“He never stopped running and trying to do the right thing and the whole time he kept his dignity in the dressing room. It takes a big man to do that.”