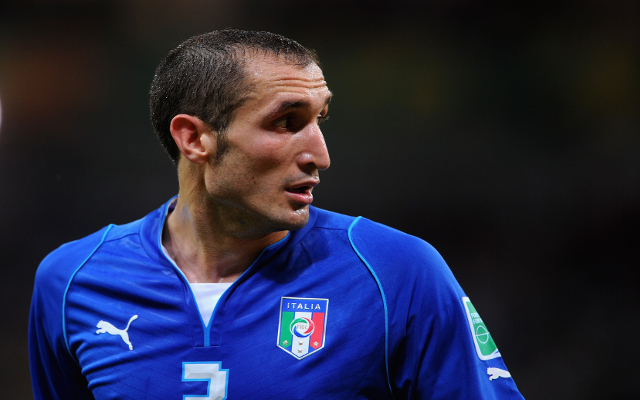 All the latest headlines from the newspapers in Italy as Italy and Juventus clash over Giorgio Chiellini’s injury status as the defender returns for treatment.

– Clash between Italy and Juve.

– Change of plan: injured Giorgio Chiellini recalled. Team manager Oriali: ‘Did they not want to do us a favour? You can translate it like that…’

– The shadow of a snub towards Antonio Conte. Bianconeri reply: ‘Allusive comments, we always collaborate’.

– Gianluigi Buffon: ‘Antonio is a tough guy, we needed that’.

– Zaza and Berardi the Azzurri jewels.

– Sassuo…gold. President Squinzi: ‘We are the model club for Italian football’.

– Andrea Agnelli needs €29m to get the two strikers.

– Serie A revenue: Inter and Roma rise, Milan fall. Our estimations for the new season have Juve again in front with €275m.

– Game between ranks for the Rossoneri and Spaniard moved well, but above all ex-Atalanta player impressed. The Coach tells Galliani: ‘He is a champion’.

– Transfer market and Rafa: Napoli doubts and the fans drift away.

– Marotta recalls Chiellini, then row between Oriali and Juve.

– Defender back in Turin for treatment. Team manager intervenes: ‘A snub towards Conte? You decide’.

– The club enraged hits back at ‘allusive comments’.

– Walter Mazzarri: ‘This Inter is like me, we are at the start of the project. The top three from last season are still in front, but then it’s balanced. Nemanja Vidic is a champion, I always wanted Osvaldo and Guarin can play second striker’.

– David Trezeguet: ‘This is a Juve for the Champions League’.

– Giuseppe Rossi pushing to be back in December.

– Bonaventura and Torres, here are their first goals.

– Bari-Perugia, race to the top of Serie B. Ternana seek another victory with Pescara, Avellino visit Cittadella. Yesterday Livorno and Latina ok.

– Trezeguet: ‘I’d give up on a fourth Scudetto to aim everything at a triumph in Europe’.

– ‘The change of management will help. I advised Pogba to stay, as he can only grow in Turin’.

– ‘Tevez and Llorente are very strong, but can give even more’.

– Market: Dani Alves free in June, Marotta is considering it.

– Buffon: ‘Conte’s era was finished’. ‘If he had stayed at Juve we would’ve had difficulties. Zaza? He’s a phenomenon’.

– Gaston Silva: ‘Juve and Inter wanted me, but I said yes to Toro’.