Which Manchester United star will come out on top…

The new ratings for FIFA 2015 have been released, which means that concerned fans have an early opportunity to find out which of their stars have done well, and which have not.

Check out the top ten Manchester United players below: 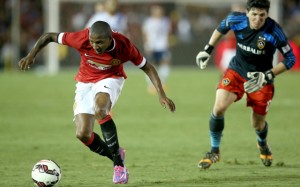 The wide-man has been given a new lease of life under Louis van Gaal, after being handed a second chance to impress at Old Trafford. However, his rating is still surprisingly high.