England take on Switzerland later today, in what is a tough test for Roy Hodgson’s side in their first Euro 2016 qualifier. There is plenty of quality on show in the home side’s squad, including several players that have been attracting interest from Premier League teams.

CaughtOffside takes a look at five key Swiss players that are likely to come face to face with the Three Lions on Monday: 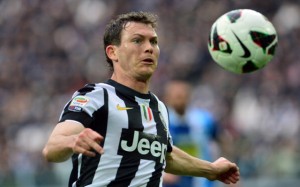 The experienced defender has been with Juventus since 2011, having joined the club from Lazio. The 30-year-old has 67 caps for his country, scoring five goals, the last of which came against Peru in 2012. He favours a role on the right-hand side of the defence, and is also capable of pushing into midfield.

He has been linked with Arsenal in each of the last two summers, with the most recent reports coming from the Daily Mirror. He was billed as a potential replacement for Bacary Sagna following the Frenchman’s move to to Manchester City, but the Gunners eventually opted for Newcastle United’s Mathieu Debuchy instead. But with Juventus reportedly keeping tabs on Liverpool’s Glen Johnson, the Swiss star could be available in January.