The makers of Chelsea’s 2014 calender have been made to look somewhat foolish with their picture selections, meaning that Blues fans can look forward to seeing the likes of Juan Mata, Fernando Torres and Frank Lampard back in the famous blue strip.

While it takes a bit of luck to plan an appropriate calender all those months in advance, surely the makers should have realised that at least a couple of those players wouldn’t be at Stamford Bridge come September.

Check out their gaffe below: 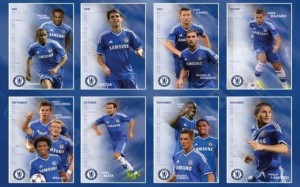