Kate Middleton is pregnant with her second child…

The Duke and Duchess of Cambridge are expecting their second child. Kensington Palace announced today that Kate, 32, mother to Prince George, one, and husband to Prince William, will give birth next year.

According to reports in the Daily Mail, the couple have long spoken of their desire to extend their family and the timing of the announcement is significant.

The source adds that as with her first pregnancy, The Duchess is suffering from the ‘super sickness’ Hyperemesis Gravidarum. As a result, Kensington Palace said, Her Royal Highness will no longer accompany The Duke of Cambridge on their planned engagement in Oxford today.

As a result of the news, William, 32, will put off becoming a full time working royal in favour of taking a new role as an East Anglian air ambulance pilot. His decision, which he announced recently, will allow the couple to bring up their family in private, living in their new home in Norfolk, Anmer Hall. 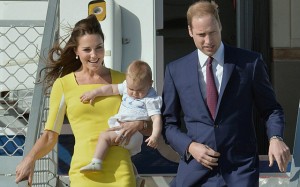