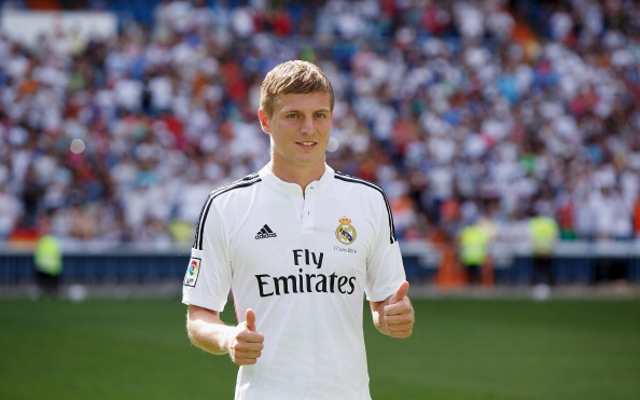 The World Cup winner secured a move to the Champions League holders this summer.

German midfielder Toni Kroos is happy that he moved from Bayern Munich to Real Madrid as he feels that the Spanish club are ”a step up” from the Bundesliga champions, Sky Sports reports.

The 24 year old signed for Los Blancos earlier in the summer with the Champions League holders paying Bayern £25 million for the midfielders services.

Kroos is excited about his move to La Liga and has absolutely no regrets about swapping Munich for Madrid.

“I’ve done everything right – I’m 100 per cent satisfied,” he told the Bild am Sonntag newspaper.

“In a worldwide standing, Real Madrid are a small step ahead of Bayern Munich.

“If I just think about my presentation at the Bernabeu, there were 20,000 fans there even though I had never played a single second for Real.

“Something like that is inconceivable in Germany. In Spain, the football fans are more emotional about the game.”

The midfielder’s contract at Bayern was set to run out at the end of the season so the German giants had no real choice but to sell one of their star players to the ten time Champions League winners.

Kroos won everything during his time at Bayern and expects to do the same in a Real shirt. He is also hoping to win more trophies for Germany with his sights firmly set on winning Euro 2016.

“If I look at all my list of honours, then a European Championship is all that I’m lacking,” Kroos added. “That should give me all the motivation I need.”