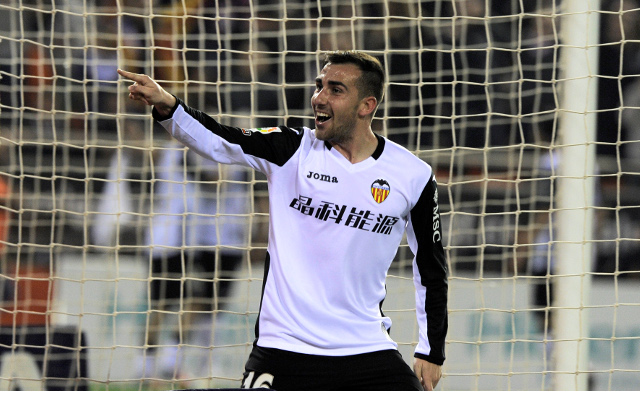 Paco Alcacer is a target for both Arsenal and Chelsea…

Arsenal will go head to head with Premier League rivals Chelsea in the race to sign new Spanish striking sensation Paco Alcacer, who has been lighting up La Liga with his performances so far this season.

The 21-year-old forward, who plays for Valencia, struck 14 goals last season – earning him a call-up to Vicente Del Bosque’s latest national squad – where he is viewed as a realistic alternative to Chelsea’s Diego Costa.

Reports in the Daily Express explain that after making his debut as a substitute in the 1-0 defeat to France, the former Getafe loan hero bagged his first goal in Spain’s 5-1 victory over Macedonia, starting the match at the expense of injured Blues striker Costa.

The source adds that Valencia are keen to tie Alcacer down to a long-term contract as Real Madrid, Barcelona and Atletico Madrid keep tabs, but according to various reports, Jose Mourinho and Arsene Wenger are ready to make bids in the January transfer window.

Mourinho signed Loic Remy and Didier Drogba this summer, in addition to Costa, as he retooled his attacking options, but is still believed to be on the lookout for a young forward who could be a star of the future.

The Gunners boss signed Manchester United and England star Danny Welbeck on deadline day, but his still short offensively, with Olivier Giroud out until at least the new year.