Former England and Manchester United midfielder Phil Neville has ensured that the famous ‘Class of 92’ are back together once more – but this time in the form of commemorative Coca Cola bottles.

The picture below appeared in reports in the Daily Mail, who explained: Neville decided to reunite Sir Alex Ferguson’s famous side by collecting Coke bottles with names on them. The Match of the Day presenter posted a picture on his Instagram showing the bottles he has accrued lined up next to each other. 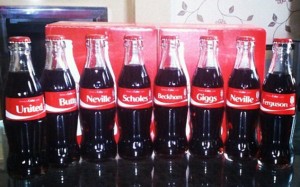