Arsenal host Manchester City on Saturday, with a game that looks to have all the makings of a thoroughly entertaining Premier League encounter, in which both teams are desperate for three points.

The Gunners are coming off the back of underwhelming draws against both Everton and Leicester City, while the Premier League champions are looking to recover from a shock 1-0 defeat at the hands of Stoke City.

The rivalry between the two clubs has grown massively in recent years, mainly due to City’s unwavering habit of signing, or attempting to sign, Arsenal’s best players.

Ahead of the game, CaughtOffside picks their Arsenal / City dream team, creating a superb combined XI that would be more than capable of winning the Premier League. Who knows maybe this will be City’s team in a few years… just kidding Arsenal fans! 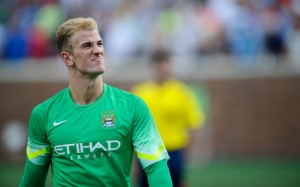 The City stopper has had his problems in recent months, but looks to be back to something close to his best so far during this campaign, and narrowly edges out Wojciech Szcz?sny.