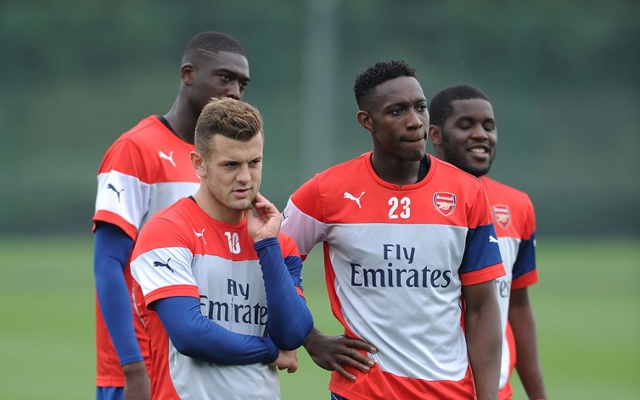 Gunners midfielder surprised at Man Utd.Arsenal midfielder Jack Wilshere believes that the club have landed themselves a bargain with the £16m signing of Danny Welbeck from rivals Manchester United, according to the Daily Mirror.

The 22-year-old was delighted to see his England international team-mate make the move to the Emirates Stadium, and is somewhat surprised at the Red Devils for allowing him to leave to a rival for so cheap.

United legend Gary Neville has also voiced some concerns for the Old Trafford club for letting a home-grown talent move to another title challenger when other players have moved for so much more money, and Wilshere says he understands why fans and former players of United might be concerned.

Wilshere added that £16m is very little in today’s money in the transfer market, and that he can’t imagine that Arsenal would ever let him leave for such a small amount.

“Gary Neville knows what he’s talking about. He probably said what he said because Danny’s a Manchester United boy, he grew up there,” he said.

“It’s a bit like Arsenal letting me go for £16m. It probably won’t happen.

“In today’s market £16m is nothing really. With the quality Danny’s got, we have a bargain.”

Welbeck joined Arsenal on transfer deadline day after spending his entire career with United, apart spells out on loan with Preston and Sunderland in his days as a youngster.

The striker became the Gunners’ fifth signing of the summer transfer window, alongside big names such as Alexis Sanchez and Mathieu Debuchy.