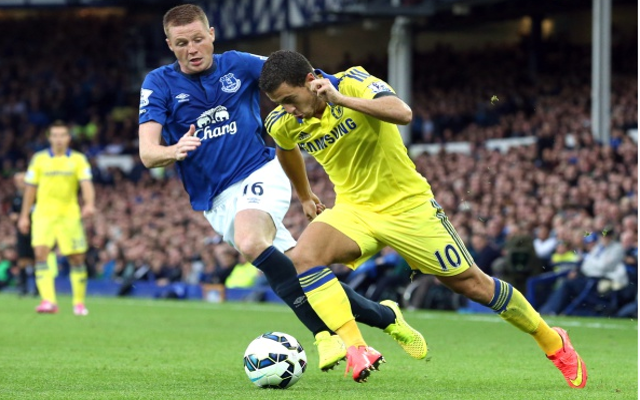 The Bernabeu side see the 23 year old Blues attacker as the ideal man to replace the Portuguese international, who has been strongly linked with a return to Man United, and Perez is readying a massive bid for Hazard to cover just such an eventuality.

Hazard has proved a consistent attacking weapon over the past two seasons and Real Madrid hope that an offer of €80m (£64m) would prove hard for Chelsea to turn down, whilst also acting as a statement of intent that could pique interest from the former Lille man.

Eden Hazard and Jose Mourinho clashed at the tail end of last term when the speedy wide-man questioned the tactics employed by Chelsea for their Champions League semi-final clash with Atletico Madrid, which in turn led to the Stamford Bridge boss attacking the player’s work ethic, or lack thereof.

Though the two appear to have patched things up there is perhaps a chance Hazard would be tempted by a move to the Spanish capital, though if Chelsea were to clinch either a Premier or Champions League triumph this season then those chances may be limited.

Chelsea paid £32m for Hazard in June 2012 and the Belgian racked up 13 goals and 20 assists in his debut campaign and last term finished as the club’s leading assist maker and top-scorer.

Perez is looking to bring in further Galatico additions having brought in the likes of Gareth Bale, Toni Kroos and James Rodriguez over the past 18 months and the Spanish giants see Hazard as a ready made long term replacement for Ronaldo.