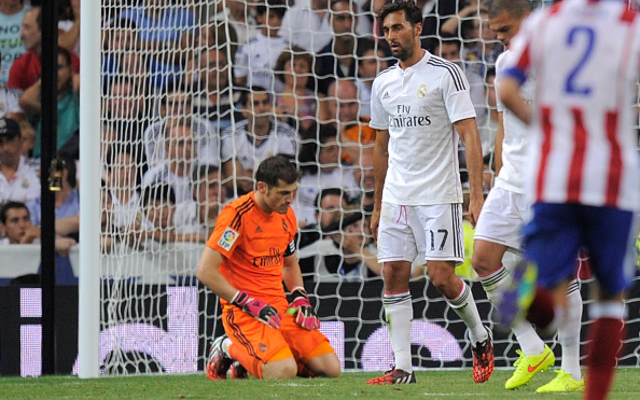 Real Madrid goalkeeper and club captain Iker Casillas has told reporters that he is not harbouring any grudges, despite being the subject of supporter frustration during his side’s 2-1 defeat against Atletico Madrid.

Real’s loss in the Madrid derby made it back-to-back La Liga defeats for the European Champions, who were also beaten by Real Sociedad prior to the international break.

Casillas has been regularly criticised for his performances for club and country in recent months, and has been struggling to maintain the form that saw him become one of the best goalkeepers of all time.

The 33-year-old Spaniard has played 684 games for Madrid dating back to 1999, but has made just 24 La Liga appearances since the start of the 2012-13 season. He has also played 157 times for his country, but is now likely to find his spot in the team under pressure from Manchester United’s David de Gea.

“The crowd have the final say and if they think they should whistle you have to accept it and respect their opinions,” the goalkeeper, who continues to keep Keylor Navas out of the side, told reporters after the Atletico game.

As Goal.com explains, Tiago headed Atletico into a 10th-minute lead before Cristiano Ronaldo equalised from the spot, but Turan struck the winner, curling Juanfran’s cutback into the bottom corner after Raul Garcia’s clever dummy. Casillas felt his team deserved a draw but praised Atletico for their ability to grind out the win.

“The way to respond is to train and play football. The second half was a hammer blow, we were controlling Atletico well,” he said. “We were taken by surprise on a corner and Turan struck brilliantly. The result is a bit unfair and a draw would have been right. But Atletico know how to work their games and we have to congratulate them, just as on other occasions it’s us that wins.”