The most emphatic rivalries and feuds in the Premier League era…

Rio Ferdinand has reignited his long-standing feud with John Terry, which dates back to the alleged racism incident between Terry and Rio’s brother Anton back in 2011.

Ferdinand admits he no longer speaks to Terry and Ashley Cole, as a consequence of the incident. The former Manchester United defender, who is now with Queens Park Rangers, was quoted in the Telegraph this week: “For me, the biggest idiot will always be John Terry.”

The former Manchester Unit star regrets not being able to speak out at the time due to legal advice, and an extract from his autobiography #2sides states: “As England captain and my centre-back partner he could have saved everyone a lot of pain by admitting immediately he used the word in the heat of the moment, but was no racist.

“I think that’s probably what happened and what the truth is. Anton and I would’ve accepted that – instead he never gave us a chance. That was the betrayal. He tried to run away from what he had done.”

But does Terry v Ferdinand rank as the biggest Premier League feud of recent years – here are five big ones, with the names in brackets representing the players team at the time of the incident: 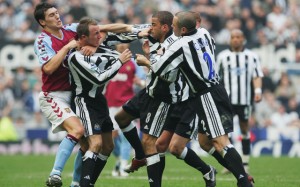 Newcastle team-mates Lee Bowyer and Kieron Dyer were sent off for fighting each other in the Premier Leage defeat to Aston Villa at St James’ Park. The Magpies were already 3-0 behind and down to 10 men as the wheels came off for Graeme Souness’ side. Bowyer and Dyer offered grovelling apologies after the shameful end to the match. The England midfielders flanked flint-faced manager Graeme Souness at his post-match press conference.