Amanda Holden is an Everton fan. The TV presenter, and celebrity supporter, has stepped out in the famous blue shirt for Everton fansite www.evertonarentwe.com, and the picture can be seen below.

According to the Daily Mail: last year, Holden joined a large number of Toffees fans who voted for this season’s crest to adorn the club’s shirt. 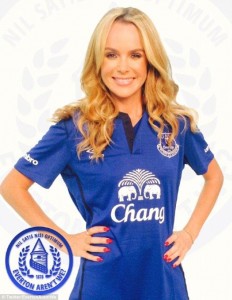