There are not many people in the world that could leave one of the Premier League’s all-time deadliest strikers feeling starstruck, but that was the effect meeting Johan Cruyff had on former Arsenal star Ian Wright.

The day itself was already a special one for Wright, as he was celebrating 17 years since the day he scored his 179th goal for Arsenal, taking his place at the top of the Gunners’ all-time top goalscorer list ahead of Cliff Bastin.

Wright uploaded this picture across social media with the caption: ‘selfie with football royalty. Johan Cruyff’. It seems even footballers have their heroes: 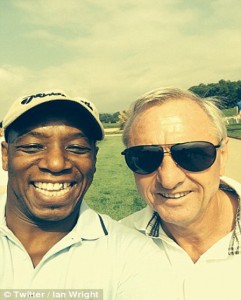