Can you see the likeness? The Simpsons vs Mesut Ozil…

As if Manchester United’s new hero needed to have done anything else to be more popular at Old Trafford: Radamel Falcao has already got one over on Arsenal midfielder Mesut Ozil.

The Colombian forward received a tremendous ovation as he made his United debut against Queens Park Rangers on Sunday, and his popularity among United fans is only likely to grow after the Daily Mirror dug up this tweet from 2011.

Falcao compared Mesut Ozil, now with Arsenal, to characters from popular cartoon: The Simpsons. The tweet, posted in March, which racked up over 8,000 retweets, translates to “Ozil has eyes like The Simpsons.”

Can you see it: 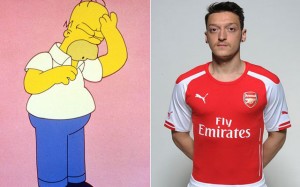