Arsenal midfielder Mesut Ozil has claimed that Samuel L Jackson is now an Arsenal supporter, following his visit to the Emirates Stadium on Saturday.

The German uploaded this picture on social media following the Gunners 2-2 draw with Manchester City:

Samuel L. Jackson and I after the #AFCvMCFC match on saturday … pic.twitter.com/rYxjvntM9E

However, the World Cup winner may need reminding that the actor has previously celebrated success for Liverpool, which included a series of joyful tweets relating to the Reds 5-1 victory over Arsenal last season:

He’s also been presented with a Liverpool shirt in the past – keep trying Mesut! 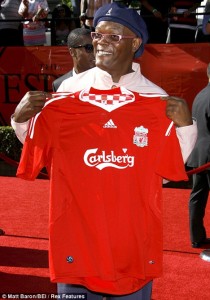