Ajax fans mocked the arrival of their Champions League visitors Paris Saint Germain on Wednesday, with a banner referencing a celebrity with the same name that they’d rather be watching.

As you can see in the picture below, the banner reads: “The only Paris we like made a sex tape” – referencing American celebrity Paris Hilton. The game itself finished 1-1, with Lasse Schone cancelling out Edinson Cavani’s opener. 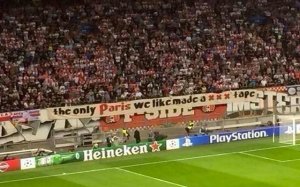