Zlatan Ibrahimovic played for Ajax between 2001 and 2004…

Ajax went all out to welcome back former star Zlatan Ibrahimovic, with this banner that declared the Swede the ‘Son of God’. The 32-year-old forward scored 48 goals in just over three season with the Dutch club.

Despite the warm welcome, Ibrahimovic was able to get his name on the scoresheet, with the match finishing 1-1. 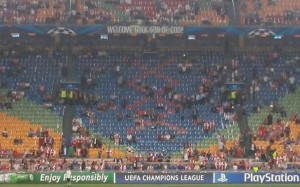