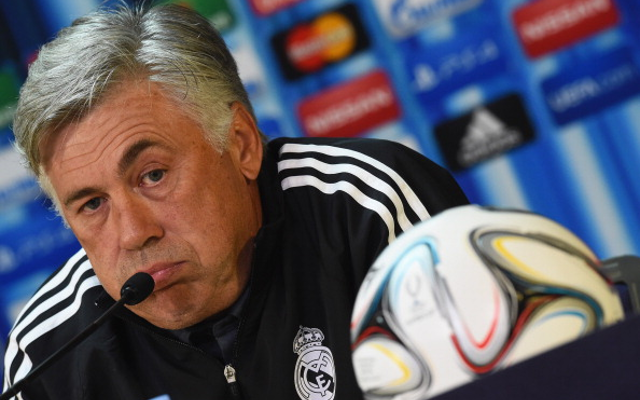 Carlo Ancelotti is under increasing pressure at Real Madrid…

Real Madrid are believed to be lining up former Liverpool and Chelsea boss Rafael Benitez to be their next manager, according to reports in the Italian media.

Madrid’s current boss, Carlo Ancelotti, is under increasing pressure after allowing his team to suffer two defeats in their opening three La Liga games, the latter of which game against local rivals Atletico.

Ancelotti eased the pressure on himself and his team with a 5-1 thrashing of Basel in the Champions League on Tuesday, but that is likely to only calm the wrath of the demanding Real fans.

Supporters of the Spanish giants have been unimpressed with their team’s start to the season, and have been open with their dissatisfaction regarding the sales of Angel di Maria and Xabi Alonso to Manchester United and Bayern Munich respectively.

The former AC Milan coach led Madrid to their first European title in 12 years last season, and won the Spanish Cup, but that has not helped his case after a difficult campaign thus far.

Benitez looks likely to leave current side Napoli this summer, after failing to secure progress into the Champions League group stage. It is believed that he turned down the Madrid job twice while at Liverpool, but it looks as if he may finally be lured to the Bernabeu.

The Spaniard has enjoyed plenty of success on the European stage, having guided Liverpool to victory in Europe’s premiere competition back in 2005, and also won the Europa League / UEFA Cup with Chelsea and Valencia.

Former Chelsea manager reveals why Frank Lampard can do well as a manager October 18, 2019 12:45
Chelsea FC