Journalist and celebrity Arsenal fan Piers Morgan will be on the Clare Balding Show on BT Sport tonight.

One of the highlights of the show sees Piers put on Arsenal’s goalkeeper kit and face penalties from Clare and footballing guests Craig Bellamy and Kelly Smith.

Ex Liverpool star Bellamy sends his shot wide and Kelly scores, but Clare’s effort is tipped wide by a sprawling Mr Morgan, who gets a bit carried away with his celebration.

Watch the action below. 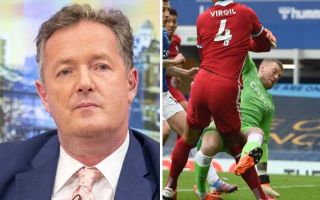