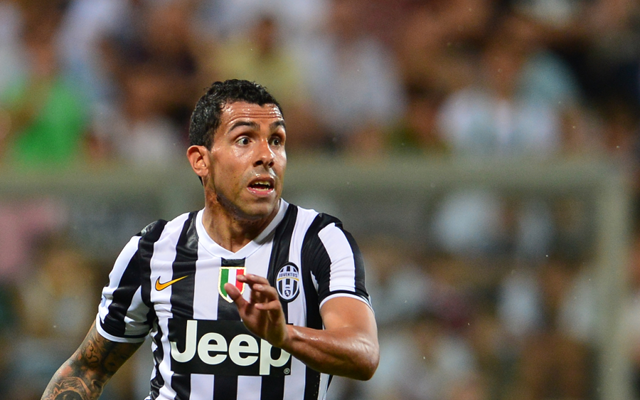 All the latest headlines from the newspapers in Italy as Juventus striker Carlos Tevez puts the pressure on AC Milan ahead of their clash at San Siro.

– Apache fires up the San Siro showdown. ‘Rossoneri cannot hide, they are playing at home and must take the initiative’.

– ‘My Juve is stronger than a year ago’.

– We begin with Cesena-Empoli, who never had so many season ticket sales.

– Blond, wearing the Lazio Number 8: Basta reminiscent of Re Cecconi.

– Antonio Conte: ‘Give me Europe’.

– ‘Win to earn my World Cup campaign. We’ll qualify, then work without minimal objectives. I have no prejudice against Mario Balotelli, but with me it’s a revolving door, so you can enter and exit’.

– ‘Simone Zaza fortunately plays at Sassuolo, as he’d find no space at a big club’.

– ‘Daniele De Rossi like others has a positive rage within him. I want a group of 30 based on meritocracy’.

– ‘I wasn’t friendly with Baggio. Inzaghi is similar to me. Lotito is not a problem, as I am in charge’.

– It’s a mad Milan, Inzaghi scares Juve. San Siro packed out and ex-Allegri admits ‘it is a special game for me’.

– Liverpool and Borussia: Balo and Immobile in action today.

– Have Italian clubs woken up in Europe with five wins out of six? Yes, but let’s wait. Man City and Atletico Madrid will be the moments of truth.

– Tonight Milan-Juve: a special match for the Coach.

– Massimiliano Allegri goosebumps. ‘I am not afraid. Inzaghi? I started out training small teams…’

– Berlusconi: ‘Win and all is forgiven’.

– Duel between Menez and Tevez, big protagonists of the season so far. Argentine: ‘These are my games’.

– Toro, Nocerino takes on the alarmists: ‘Have faith, the goals will come’.

– Dybala: ‘Palermo will rise to the occasion’.

– PSG powder keg with Ibra’s clan against the French players and Blanc at risk.