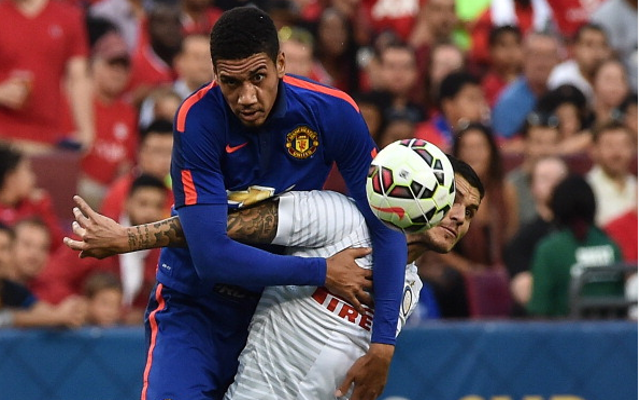 The Gunners could look to Chris Smalling for defensive reinforcements…

Arsenal are set to make a fresh approach for Chris Smalling in January, as Arsene Wenger desperately seeks out defensive reinforcements for his injury stricken squad.

The versatile Manchester United star, who can play as both a centre-half and a right-back, is seen as the ideal candidate to provide back-up to the current Gunners back-line, while also challenging for a spot in the starting XI.

According to reports in the Daily Mail, Wenger rates the player highly, and was interested in signing in from Fulham in 2010, before Smalling chose to instead make the move to Old Trafford.

Despite an underwhelming spell with United, the Arsenal boss still believes that the England international has great potential, and that a move to London could help boost the 24-year-old’s chances with the Three Lions.

The source suggests that over the summer months, Wenger had insisted on Smalling being part of any swap deal that took place with Manchester United for Thomas Vermaelen – but United refused to include him and Vermaelen ended up at Barcelona.

Wenger also inquired about the availability of Phil Jones last month, another player Arsenal tried to sign in 2010, when United and Arsenal were in talks about a potential Vermaelen move, but was told neither was available.

Smalling has struggled to live up to expectations at United, though new manager Louis van Gaal has started with him in games so far. The defender is currently on his way back from a groin injury and is available to play against Leicester today.

But Van Gaal has also indicated that he wants to add to his defensive positions in January and if that means Smalling is left out, Arsenal will make their move.