Which stars need to make a dramatic improvement for the Reds…

There weren’t many positives to come out of Liverpool’s 3-1 defeat at West Ham United on Saturday. For the Reds, it was not only a third defeat in five Premier League games, it was also a worrying sign of life without Luis Suarez.

Brendan Rodgers’ side may still be without the injured Daniel Sturridge, while Raheem Sterling – who found the net again yesterday – continues to improve and impress, but the Reds seems to be missing that spark: the attacking flair that made them such a joy to watch last season.

So who is to blame? Is it simply a case of the Anfield side still waiting for their multitude of new signings to bed in and adapt to their style of football – or is there some deeper-lying set of problems, similar to those that occurred at Tottenham when they sold Gareth Bale to Real Madrid just over a year ago. 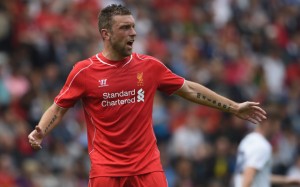 His style of play just doesn’t suit Liverpool. The Reds aren’t the kind of team to hit the ball long for a target man, and as a results his usefulness to them is limited. In many ways, Lambert is reminiscent of Andy Carroll, although thankfully his price tag was worth about £30m less, he is a good player for the right team. At Southampton he was the main man, the focal point of their attack, and it worked. He will never be that at Anfield, and his confidence seems to be suffering as a result.