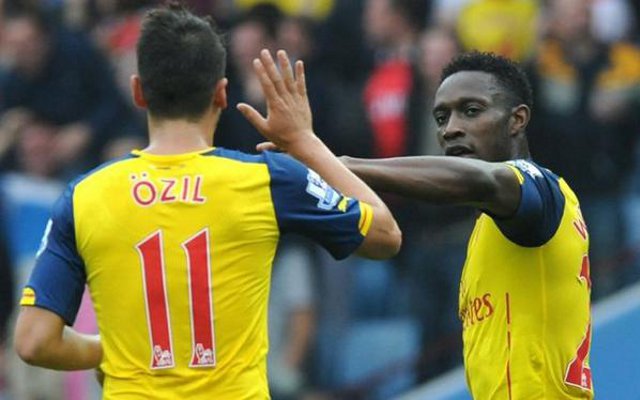 Arsenal’s Mesut Ozil has praised new signing Danny Welbeck after the pair linked up superbly on Saturday, assisting each other’s goals in the 3-0 win over Aston Villa.

The German playmaker said that the 23-year-old adds another dimension to the side with his pace, and the fact that he knows exactly which runs to make means everyone else’s game is made easier.

“When you analyse [Welbeck’s] game, you notice that he makes a lot of runs and knows where he needs to be”, the German told the Arsenal site.

“We’re pleased to have a striker like him here. He makes the game simpler for us through his runs and speed.”

“[On Saturday] he proved again that he is very dangerous in front of goal and personally, I’m happy for him because in recent games, he missed a few chances.”

“Things worked really well for him on Saturday and that’s why I’m pleased for him.”

Welbeck got his first goal for Arsenal against Aston Villa on the weekend after signing for the Gunners on deadline day for £16m. Ozil believes he will prove to be a real bargain at that price and can really add something to the team.