Alessandro Florenzi will be fined for his celebration…

Italian giants AS Roma have confirmed that they will fine midfielder Alessandro Florenzi for his goal celebration against Cagliari, who also received a yellow card for the incident.

Speaking after the game Roma coach Rudi Garcia confirmed that Florenzi would be forced to pay a club fine for picking up an avoidable booking, despite enjoying the touching moment.

Garcia said: “He’s going to pay a fine, but he will be happy to pay it. It was a beautiful image, to see his grandmother so delighted and moved. I love to see moments like this. Florenzi now risks becoming the idol of all grandmothers across Italy.” 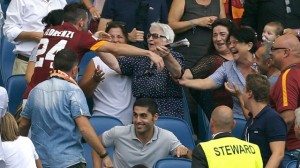