Ludivine Debuchy will be tasked with nursing husband and Arsenal defender Mathieu Debuchy back to health, after the Frenchman was ruled out for a minimum of three months.

SEE ALSO:
Mathieu Debuchy Out For Three Months – All the latest news on the injury
Top 100 Sexiest Football WAGs In The World 2014.
Hottest Celebrity Football Fans

The club today revealed that the ankle injury he sustained against Manchester City was worse than first feared, and the Gunners are now likely to be without him until the turn of the year.

Hopefully WAG Ludivine will be able to help aid his comeback with some quality family time. You can several snaps of her in the gallery below: 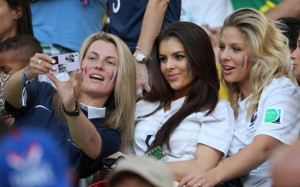