Alex Gerrard cut an intriguing figure as she hit the town in this cut-out black catsuit reminiscent of music legend Cher.

It was a strange choice all round from the Liverpool WAG, wife of Reds skipper Steven, who failed to realise that her white underwear was still fully visible through the lace.

‘If I Could Turn Back Time’ singer Cher, 68, wore the sheer sequin-encrusted costume on stage in Berlin, in 1992 when she was 46. So at least the 31-year-old stunner will probably gain a slightly more favourable reception for this effort: 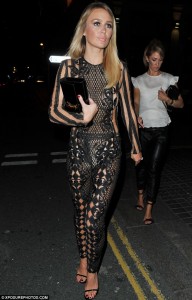 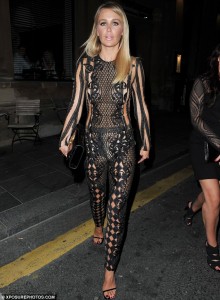