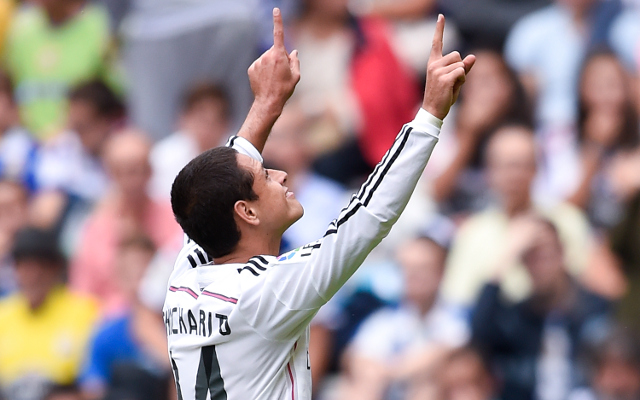 Mexican striking legend Hugo Sanchez has been in glowing in his praise of loaned out Man United man Javier Hernandez according to reports on Spanish website AS.

The 26 year old struggled to retain a foothold in Man United’s starting eleven throughout his four season spell, this despite netting 59 goals in 154 appearances, of which 69 were from the bench, and his two goal salvo away at Deportivo La Coruna will have first choice striker Karim Benzema looking over his shoulder.

“He’s a phenomenon. He is very fast, intuitive, with movement speed and shoots well with left, right and head.

“When given more time and chances, hopefully his effectiveness is the [level] required in Madrid. In this team enough chances are created and that will help Chicharito.”

Louis van Gaal opted to loan out Hernandez and sold Danny Welbeck to Arsenal, so as to make way for British record transfer signing Angel di Maria and loaned in Colombian Radamel Falcao.

Hernandez will hope to do enough in his loan spell to warrant a permanent move to the Bernabeu and his two excellent strikes on Saturday, during Real Madrid’s thumping 8-2 win, will certainly aid his case.

Sanchez enjoyed a sparkling spell at Real Madrid, netting a phenomenal tally of 207 goals in 283 appearances for the Spanish giants.