Which defender are you hoping your team will sign in January…

World class defenders appeared to be at a premium this summer, and the distinct shortage in signings resulted in both Arsenal and Manchester United being left short at the back.

Arsenal’s injury crisis has crippled their already limited options, and has led to manager Arsene Wenger to even consider several potential free agent signings who could be a stop-gap solution.

Manchester United missed out on the likes of Mats Hummels and Thomas Vermaelen this summer, and their lack of a world class centre back has been exposed on several occasions already this season, no more so than in Sunday’s 5-3 thrashing by Premier League new boys Leicester City.

Here are ten options that could be solving a defensive crisis come January: 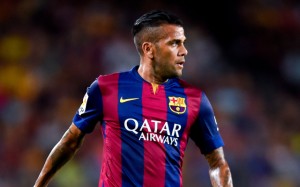 The veteran full-back is well aware that his contract at Barcelona is expiring at the end of the season, and has resigned himself to leaving. Could be a more than useful addition for a Premier League team, especially Man United, who won’t have been impressed with Rafael on Sunday.