Villans stopper has under hand on Stamford Bridge counterpart.

Aston Villa travel to Stamford Bridge on Saturday to face runaway league leaders Chelsea in what will undoubtedly be their toughest encounter of the season so far.

Jose Mourinho’s men have stormed into an early lead thanks mostly to the goals of £32m new signing Diego Costa, however, as the stats below show Villa may be in a strong position to keep the Blues at bay.

Compared to Chelsea’s own John Terry, Villa’s Philippe Senderos has actually been performing better, and his contribution to his side’s good start to the campaign has given fans a cause to smile despite being tipped to go down over the summer.

Where Terry has the Swiss international topped on tackles won and ariel duels, Senderos tops out with a better percentage for interceptions, blocks, clearances and has made fewer defensive errors.

Villa have proved efficient at taking their chances so far this season and should they manage to get at the Chelsea back line they may find themselves taking advantage of Terry’s shortcomings to take an unexpected lead. 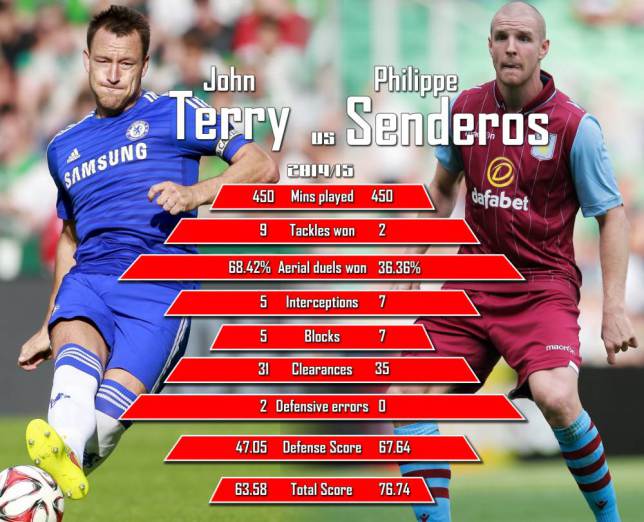