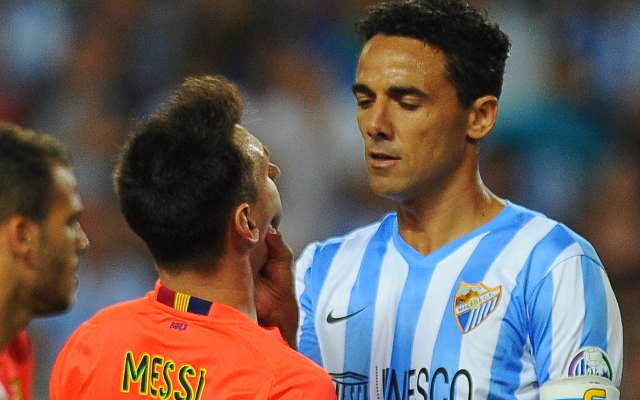 Lionel Messi was grabbed by the throat and pushed to the floor by Malaga’s Weligton as Barca failed to register a single shot on target in the scoreless draw.

In the second half of a feisty game at La Rosaleda, the Malaga defender grabbed Messi by the face and pushed him to the ground. The Daily Mail reports that the Brazilian, who was caught stamping on Messi in 2009, claimed that his actions were in response to the Barcelona star calling him a “son of a bitch”.

Barcelona manager Luis Enrique called Malaga Barca’s “toughest test” after the game, with the Catalans failing to get a shot on target in the league for the first time since 2009. Things might have been different if Weligton, who was only booked for his violent act, had been sent off.

Barca will console themselves with the the fact that they have yet to conceded a competitive goal this season; but they will surely be counting the days till the end of Luis Suarez’ ban. Messi, who has three goals and five assists from Barca’s first six games, is unlikely to be worried about losing his place to the Uruguayan striker.