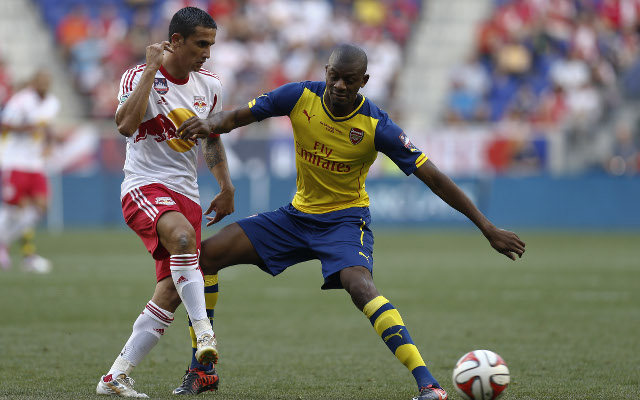 Arsene Wenger has announced that Abou Diaby was the reason he did not bring a new midfielder to Arsenal and the Emirates this summer.

Arsenal boss Arsene Wenger has revealed that Abou Diaby’s return to football was one of the main reasons he didn’t sign a defensive midfielder this summer.

Having been linked with a number of midfielders during the transfer window, including Real Madrid’s Sami Khedira, Bayer Leverkusen’s Lars Bender, and Sporting Lisbon’s William Carvalho, the London club ended up signing no one, and were seemingly left with the aging duo of Mikel Arteta and Mathieu Flamini in the centre of the park.

Arsene Wenger believes that Abou Diaby will also be able to slot in at defensive midfield this season, although Arsenal fans may not have the same faith in the injury prone Frenchman as his compatriot does.

Having initially showed great promise when he joined Arsenal in 2006, Diaby suffered a broken ankle soon after joining and it was believed that poor handling of his recovery has led to a number of subsequent injuries.

With the midfielder making a total of 124 appearances for Arsenal in his eight years at the club, it’s difficult to understand how Arsene Wenger thinks he can step up for the Gunners this season.

When asked if there was any regret over not signing a midfielder over the summer: “Not at all,” Wenger told Arsenal.com.

“Abou Diaby is a natural resource that I have because he’s a top-quality player. If you look to find better quality players than Diaby on the market you will have big problems.”

“He has not played for one and a half years and I tried to find a solution that suits him and us. What’s happening is that he’s not at his best at the moment because he needs competition,” he continued.

“He has not got that change of pace and the power in his challenges that are his strengths, but if I can maintain him without any injuries he will come back and it could be a very satisfying solution for him and us.”

Arsenal fans will be thinking that is a big ‘if’ from their long serving manager, with Diaby’s injury record certainly not suggesting he will be the solution for the Gunners this season.