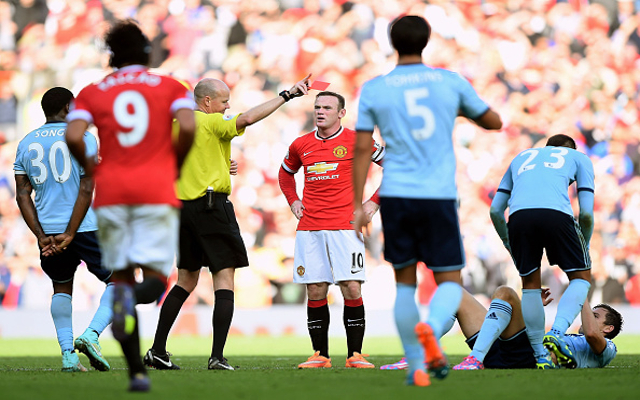 Man United picked up a much needed win though Louis van Gaal’s men were forced to fight for all three points against West Ham.

The home side were ahead five minutes when a fine flowing move saw Brazilian right-back Rafael provide the ammunition for Wayne Rooney to net a fine opener, though the England man’s day was set to end in a rather negative manner.

With barely 20 minutes on the clock Robin Van Persie found himself a yard in the box and lethally found the corner to hand Man United a two goal lead.

Man United’s back-line, including debutant Patrick McNair, had already been tested and van Gaal watched on as they once again hit self-destruct.

A standard corner into the box led to a defensive scramble before Diafra Sakho calmly headed into an empty net.

West Ham were piling on the pressure and that uncertainty may well have led to the rash act that prematurely ended Wayne Rooney’s involvement in the game.

The Man United skipper, fearing a fast breakaway from winger Stewart Downing, kicked out at the West Ham attacker in his own half and was given his marching orders.