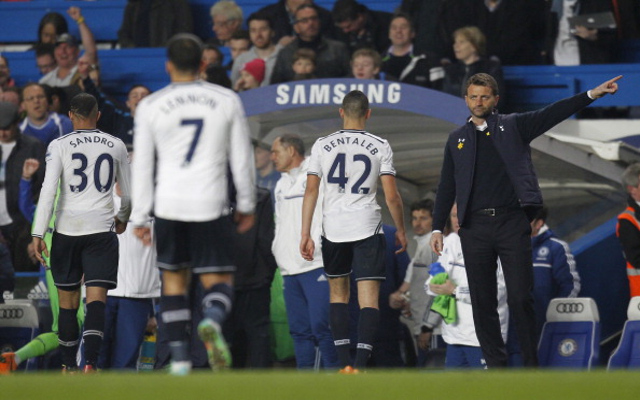 Former Tottenham player and manager Tim Sherwood has revealed in the Independent that he almost joined Arsenal, but at the last minute the Gunners signed Patrick Vieira instead.

The midfielder went on to play for Tottenham for a number of years, and managed the White Hart Lane residents following Andre Villas-Boas’ sacking in 2013.

The 44-year-old got a fair bit of stick during his stint as manager for being an Arsenal fan, as did Tottenham fans for having a Gooner as a manager.

As an Arsenal fan Sherwood surely would have loved to have played for his boyhood team, but he explained that former Arsenal manager Bruce Rioch’s sacking was the reason the deal fell through.

“I was days away from becoming an Arsenal player in the summer of 1996,” he said.

“When Bruce Rioch called me at home on an August night, I expected him to tell me what time to get to London Colney for my medical. Instead he told me he’d been sacked and the deal was off. They ended up signing some lad called Patrick Vieira.”

Speaking about the North London Derby Sherwood spoke about the atmosphere in the stadium.

“To my mind, there was nothing like the north London derby. They were the most intense games I played in. When I scored the second goal from a free-kick at White Hart Lane in a 2-1 win over Arsenal in November of my first full season, the place shook. It was electrifying.”

Arsenal have a fantastic record in the North London derby under Arsene Wenger, and with Tottenham’s poor form at the moment the Emirates faithful will be confident heading into this evening’s match.

The Gunners are coming off the back of a 3-0 win over Aston Villa in the league, while Tottenham suffered a 1-0 defeat at he hands of struggling West Brom, but it is often said that form goes out the window during a derby.